Because you can’t beat complete. Create the next viral meme now! 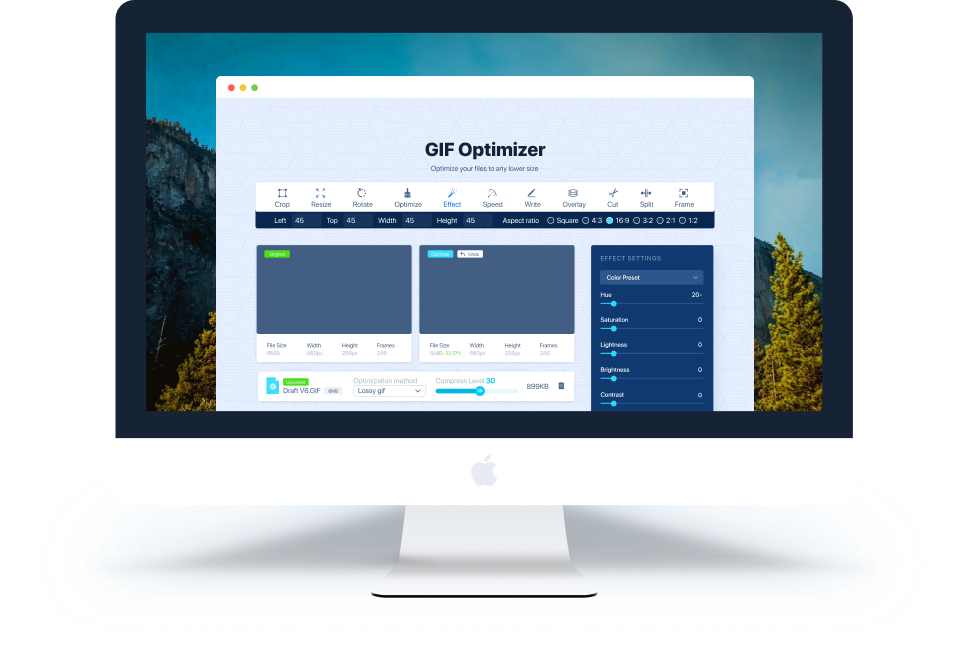 How to Compress a File?

1
Open Link
Open link to the Optimizer Page and upload a GIF, JPG, PNG, or WebP. You may choose to do so from the local drive, Google Drive, Dropbox, or through a link. You can also do Drag and Drop.
2
Do what you need
Do what you need to do-- create, resize, or convert. Let your instincts take over.
3
Download and share!
Download the file after saving changes. For all we know, you may now have the next viral meme at your disposal.
GIF Compressor
Easy-to-use tool for reducing an animated GIF’s file size simply by selecting a GIF animation and the optimization method
PNG Compressor
Allows you to save precious bandwidth by reducing losslessly a PNG image’s file size with zero quality loss.
JPEG Compressor
Compress, resize, or convert JPEG photos for optimal web usage.
WebP Compressor
Quickly reduce the file size of your WebP images with the WebP Optimizer. Optimal for lossless and lossy WebP image file compression.

In the Internet world, we doubt that there is still one living being that is not aware of the existence of GIFs. GIF, short for Graphics Internet Format, debuted in June 1987 and my oh my, who would have known that it would define Internet culture over thirty years after its release

In fact, GIFs have become so popular that Google decided to have a GIF database of its own. In 2018, they acquired Tenor, a GIF platform that had as many as 300 million active users and 12 billion searches per month.

Now, let’s have a little fun and dig some GIF fun facts that you may not have known:

Because GIFs are basically the language of the Internet, it has been integrated into social media (e.g., reaction GIFs) or as marketing tools. Whatever purpose it serves, there is now a growing need for people to create or optimize GIFs. That is why a tried-and-true GIF maker, GIF generator, and similar tools are a necessity for the geeks and entrepreneurs in us.

Fortunately, Evano offers a reliable option as far as being a GIF creator or a GIF Compressor. In fact, it does even more than a GIF editor online. It can also optimize other image formats such as JPG, PNG, and WebP. So aside from being a GIF optimizer, our tool is also a JPG file converter, a PNG Compressor, and a WebP converter and optimizer. And because all of our tools are browser-based, including the all-in-one GIF optimizer, Meme Generator, and JPG file converter, you can access it anytime you want, and from any device you can get your hands on. If you don’t call that convenient, we don’t know what is.

Whatever file format you use-- GIF, JPG, PNG, or WebP-- at one point or another, you may need to optimize them. To “optimize” means to render images in the right format, resolution, size, and dimensions. The goal is to achieve the smallest file size possible without the tradeoff in quality.

Optimization is vital for website development since images can affect the loading speed, and loading speed has a direct effect on user experience. A mere three seconds of loading time could mean a potential customer loss. If you’re using animated GIFs as marketing tools, for example, you may put such a heavy load on a web page or an email.

On a more personal level, social media platforms do have file size limits and image dimension parameters that you need to follow. Facebook, for example, only allows 180 pixels x 180 pixels for profile pictures while Instagram allows 110x110 for profile pictures and a maximum of 1080x1080 on uploaded photos. Twitter only allows GIF files of up to 5MB on mobile and 15 MB on the web. Needless to say, you have to be mindful of the image file size limits on social media to get the most out of these platforms. Thus, you need to optimize images, whether it’s GIF, JPG, PNG, or WebP format.

We’re glad to make it known that Evano GIF Compressor, Meme Generator & JPG File Converter can handle all your image optimization needs and more. It is a GIF creator and a GIF compressor while allowing you to do a JPG merge and JPG compress. Aside from its capabilities to process GIF and JPG, it is also a PNG Compressor, a WebP converter, and a Sprite Sheet Cutter rolled into one. For all your image optimization needs, you came to the right place.